The series consists of 100 Trees of which I show 25 here. The structure of trunk and roots comes from the conjunction of the trees nature with the human spine. The drawings are numbered and dated continuously. They show the passing of time as lifetime and working time and at the same time represent the trees growth. You may find thoughts on the Trees of Life, as well as their essence, subsequent to the picture gallery on this page. 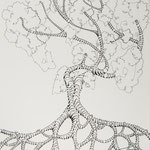 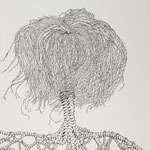 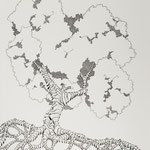 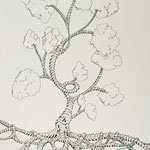 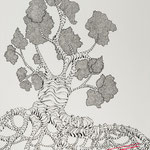 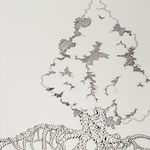 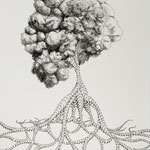 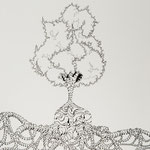 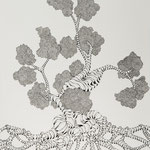 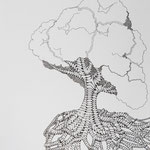 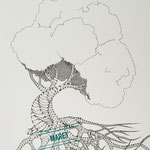 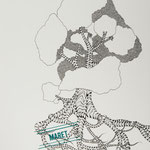 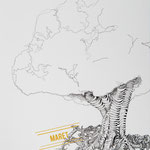 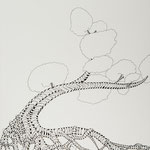 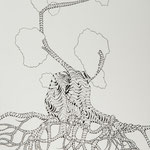 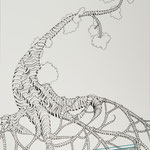 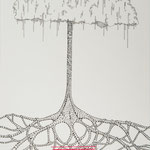 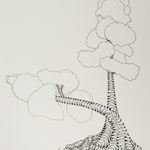 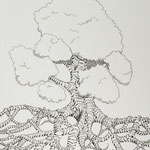 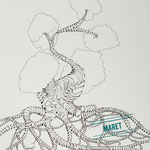 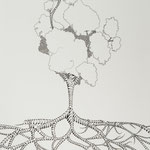 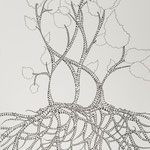 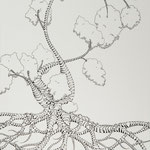 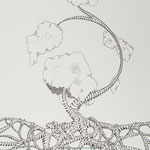 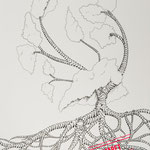 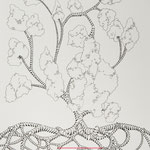 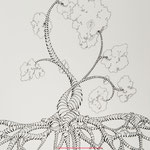 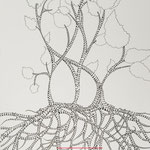 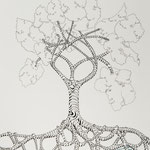 The trees seem to be hovering, as if their roots were not surrounded by soil. Their underlying origin lies deeper, in wells that lie outside the image border and are hidden from the viewers gaze. It nourishes the tree. The netting of main- and sideroots, their junctions and intersections stabilize the frame for its prolongation upwards.

Any plant knows about the laws of growth. The more ample the deep-seated root system bears trunk and crown, the easier the orientation towards the light becomes. By looking at the trees we realise: as above, so below. The crown matches the roots. The crown with its hundreds of thousands of leaves tells the trees age, health and strength to the onlooker.

The trees faces are varying: earthy and heavy, high and slender, full of movement and still. The crowns depict typical implementation as well as ones that have never been seen before. We perceive the trees crown as the “result” the trees natural growth process and hardly take time to reflect on the fact that a big crown requires rootage hidden in the ground.

The succession (first the roots, then the plant itself) is an image for the creation of new things in the world: first the idea, the knowledge, the dream arise, from which a new reality comes into existence. The small things (the first apprehending on the way to implementing an opinion) from which the vast extent of new events arise come into existence first, before the new events or objects can stand independent for themselves.

Life is growth. The occurrences that happen in the course of everybody’s lives, turn into cornerstones of the education of the self. These situations can be put on a same level with the overlapping roots beyond the image border as well as the sources (acquired knowledge / support from outside) that normally are not perceived.

The trees have been anthropomorphised to show “backbone” as well as to bring the recipient in touch with his own innermost nature.

The drawings for me are a depiction of ones own development and becoming. Put into the surrounding of a new owner, the tree is to implement the law of growth and the calling for realization in his/her life.

The 100 drawings of the Forest of Life are to be shown in chronological order, as to capture the elapsing of time. Drawings sold during the course of the exhibition are to be taken off the wall. One seed respectively is to be put in place of each drawing taken down.

More than 90% of working hours are spent on the roots. They are the basis. The crown, the result of growth is a sign of the development – normally concealed underneath the ground – that has already happened earlier.

The working time, presented to the drawings as a token is the seed which, submitted to the flow of energies, sprouts and becomes the drawing.

The daily working hours have been documented to exemplify he waning of time and the inherent dynamics. Thereby the tree series presents a glimpse into my lifetime.

The branched roots let arise thoughts of tender bones, much like the ones you see when looking at x-rays of human knuckle bones, but also of the spines winding segments that intertwine the way the bones of snakes do.

My design and aesthetics have been influenced by Hansruedi Giger as well as Tim Burton.

I started researching the human skeleton. My attention thereby was mostly focused on the spine and on how Giger as well as Burton alienated the human figure. I am not sure really, when I started combining the spine with Burtons “striped-socks monster”.

More and more, I reduced the sharp and dangerous appearing bone-prolongations in Gigers works until only bone and cartilage were left. (Burton uses hatchings, though his works have a two-dimensional touch to them.)

Around the same time I started sketching the human spine in transformed ways, I also spent time on DaVincis aircraft-designs, focusing especially on how he drew wings. The way he connected wooden poles to one another reminded me of spider legs as well as the legs of other insects.

I rediscovered the first variation of my – later to become – 'Lebensbäume' in a DinA4 drawing I had dated June 2011. The design itself was quite feminine at the time, featuring embellishment.

In my series of the Trees of Life I found to a more neutral depiction that, in its stylised way is to be found somewhere between Spine and cartilage.