Go buy yourself a fucking life, will you please? 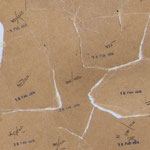 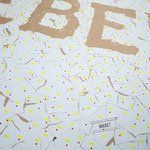 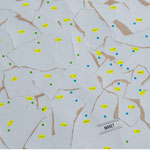 The artwork “GO BUY YOURSELF A FUCKING LIFE WILL YOU PLEASE!” illustrates the amount of possessions as well as the numerical increase of possessions in middle-class households over centuries.

1252 pieces of white paper have been sown together, surrounding the word “LEBEN”. 1251 of these pieces are each representing 12 items that can be found in a household

The following numbers are based on estimations, as no scientifically sound data exists on the topic.

PURPLE marks pieces that symbolize average possessions in the 1950's.

As you can see, the amount of possessions increases dramatically in course of industrialisation. This is not only because mass production was introduced and the possibility of producing greater numbers of goods for broad levels of the population arose, but also, because the desire to be valued / assessed via possessions has taken hold of our society in an adverse way.

“The things you used to own,

now they own you.”

Palahniuk concisely sums up the dilemma of extolled progress in all its complexity – and hits the nail on the head. From time immemorial, everything that one owned had was of tangible use in ones respective daily routine. Today however all the things we own are designed to reflect our value, to decorate our surroundings and impart individuality.

A large part of our wage labour goes towards implementing this endeavour. What is more, ownership has further consequences and demands further actions. The brains reward centre can only ever be contented for a short period of time. Possessions have to be kept “up to date” ever so often, as not to fall behind within ones respective peer group.

The accumulation of possessions is propagandised as entertainment (shopping) and is designed to divert man from the self and from worldly occurrences. We have evolved away from the old philosophers simplicity and tranquillity already, which is why we feel more and more drained. Our reason for living is not life itself any more.

Each of the 1251 white pieces of paper can be bought as an act of compensation for the future procuration of consumer goods (everything that surmounts the basic needs of housing, food and clothing) as to make visible the actual absurdity of the attempt of self-improvement through the accumulation of objects that are later-on seen as personal possessions.

The pieces of paper were priced by me at random and are to illustrate the ostensible arbitrariness of the relation between price, size and benefit of an object. In my needlework a piece of paper stands for twelve items of arbitrary value. The constrictive effect of possession is sensorially experienced as soon as individual pieces of paper are removed from the artwork. As the draining of the artwork continues, the open space increases, becomes harness-able anew and creates a broader perspective.

Completing “GO BUY YOURSELF A FUCKING LIFE WILL YOU PLEASE!” took me about a year. The work itself was quite enjoyable. In some way, at times I felt reminded of embroidery. What a typical leisure activity for women. I sat at a table, a meditation pillow in front of me, onto which I always put two pieces of paper, perforated the overlapping seams and then sowed them together by hand using needle and thread. The occupation was a slow and quiet one that required a lot of light. As it took me about half an hour or more to complete an area of 35cm in diameter, I started to at some point use a daylight lightstand and work at nights too, because I got the impression to otherwise never (never ever) be able to finish this work. What’s more is, I took pieces of paper, needle, thread and meditation pillow to meet friends in the park or to accompany my chosen son to the skateboarding track. About three quarters of a year had passed before I started on the lettering of “LEBEN”, as well as connecting the white pieces of paper to the characters.

Working on this project did not interfere with family life much as the paper-pieces, stacked over one another, did not take up much space. In the moderately spaced, old apartment, household, boyfriend, the kids and my art were able to coexist nicely side by side.

The precision of the little stitches cost me eyesight as well as a few droplets of blood. Only when the oeuvre became larger and larger (I had to roll it up to be able to store it), the idea of attaching the paper pieces to the artwork with little pieces of duct tape to be able to sow them together came to me – this “revelation” simplified matters immensely, especially as I had had to have a friend help me sowing the big pieces of white paper together before. Now, my working rhythm improved even more. I listened to audio books. Worked for hours. The pricing machine I bought over the internet. The stamp with which I dated the pieces I borrowed from a law firm residing in our building.

The work itself was quite pleasurable and so was finishing the artwork. When I saw “GO BUY YOURSELF A FUCKING LIFE WILL YOU PLEASE!” as a whole for the first time, it was at the Fotostudio Gentile and I was moved. At home I had only always been able to look at it partially, because no room in our home had been big enough to lay it out flat. After working on it for such a long time I was relieved to see that the work I had done had quality.